Design a site like this with WordPress.com
Get started
Skip to content
thephdrawer fMRI, Motivation July 5, 2018October 12, 2018 5 Minutes

I started my PhD on human values and motivations looking forward to use some elegant functional neuroimaging techniques. The project aimed to investigate human basic motivations (e.g. food, sex and affiliative) as well as more complex ones (e.g. benevolence, tradition, power and achievement). In order to study the neural correlates of basic and complex motivations, we decided to present pictures representing each motivation type inside an MRI machine and analyze subjects’ brains using encoding-decoding models. These models were the state-of-the-art for fMRI univariate analysis, and Jack Gallant’s group was publishing some beautiful papers applying them to the visual system. His group was able to reconstruct movies from brain activity using encoding models with fMRI.

How do these models work? When running the fMRI analysis (based on an indirect measure of brain activity using blood-oxygen level dependent measures, also known as the BOLD signal), we build a design matrix containing all the information from our experiment. We usually have very clear experimental categories to build our experimental contrasts, represented by colorful statistical brains. For instance, if I am interested in food, sex and social motivations, I would use a group of pictures representative of each category (e.g. people eating, people having sex and people talking to each other).

I was interested in the anatomo-functional overlap of these basic appetitive motivations in the brain, aiming to estimate whether a general “appetitive motivational system” exists for each individual. However, even these basic rewards, in humans, are not completely independent from each other. Food is also a social activity, sex depends heavily on social cues, and well, one could imagine a mix between food and sex appetites. These blended representations were a problem to my experimental question, and I was looking for an innovative way to analyze it. Encoding models seemed a good way to try it.

When using semantic encoding models, we don’t have experimental categories, we have features. Thus, instead of aggregating my data into food-sex-social categories, I had a very detailed description of what was going on each image. For instance, the semantic feature “pleasure” could be contained in all food/sex/social images, while more specific features (e.g. sexuality, tenderness) would be more specific. And since we were also interested in complex motivations (e.g. stimulation, hedonism, benevolence , tradition, etc), we aimed for a big database of human values and motivations, also known as the Schwartz Human Values structure. This is what we had in mind: 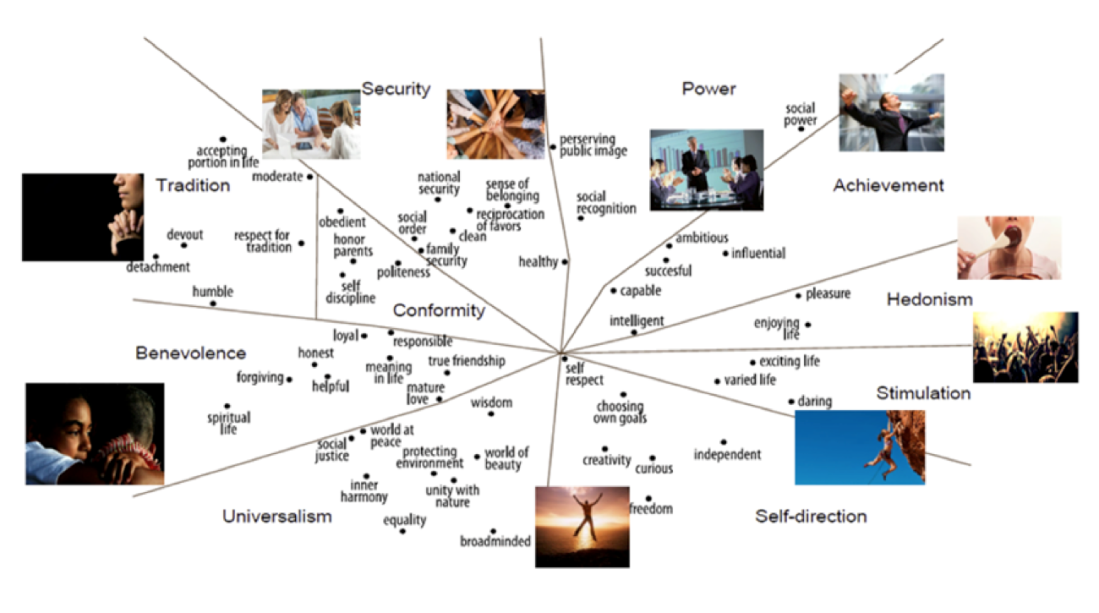 In order to run these models one needs a massive amount of data. Each subject needs to be scanned for many hours, with many stimulus repetitions distributed over different days, since you cannot scan a single subject continuously for many hours: people would get tired, bored, uncomfortable or would fall asleep. This is probably the reason why researchers frequently scan other lab members’ brains, as well as their own. The data from different sessions on different days are then compiled to run the statistics.

We spent an entire year building the stimuli and all the semantic features for a very large image database. We ended up with 840 unique images from Google and other image platforms, each with their own visual and semantic features. You can see the most frequent words in the figures below (font size represents word prevalence). With this in hand, we could finally run our encoding models and see how they would behave for motivational features. We were very excited, as you might imagine.

Our first results from pilot experiments were the probability maps (estimated activation), in which each session is represented in a different color. If you look at the image below, you can see they are not consistent at all among themselves. We were puzzled. When combining all sessions, we just couldn’t make any sense of the data: it was like looking at different individual brains each day.

But the most important lesson here might be about methods. Human behavior, including motivations and appetitive states, is not exactly like the visual cortex. Perhaps this is one of the reasons why we still struggle with bottom-up/top-down regulation models. While the visual cortex is very well documented in terms of information processing steps, we still have a hard time discussing possible models for cortical-subcortical connections. We have a lot of work to do in terms of optimizing methods to our initial question, and we also need more investigations on the intra-individual (in addition to inter-individual) variability of appetitive states.

Everytime I told this story people were interested – and somewhat amused. But there is also something to be learned from it. We believe more people should share stories about “failed” experiments in which things don’t work quite as expected – but turn up interesting insights on what went wrong. Especially when these stories can suggest new approaches or solve problems that other groups might be having in other labs. This blog post is a start.

As for the guy that literally changed my brain, I did send him my pre- and post-sex brain images. I thought it would be a flattering message, but receiving pictures of a woman’s brain can be just weird instead of flattering. But at least it’s a good story for The PhDrawer. 🙂

PhD student in the Morphological Sciences Program of the Federal University of Rio de Janeiro, Neuroscience and Neuroimaging, in collaboration with the D’Or Institute for Research and Education. She has a son and a social life in the samba circles of Rio de Janeiro.

View all posts by thephdrawer